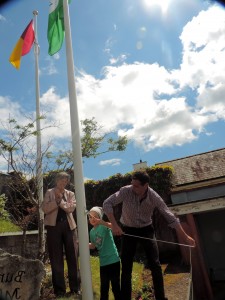 Cheltenham Gold Cup winner Davey Russell returned to his native home town of Youghal yesterday.
Davey was here to help 6 year old Izzy O’Connell raise a second Eco Green Flag at his old school Bun Scoil Mhuire .
The school was awarded the flag by Mary Stack the Environmental Awareness officer for Cork County council in recognition of the schools ability to reduce its energy consumption considerably.
6th Class student Leslie Cashman has been a member of the green team for over three years.
Leslie told the East Cork Journal that a committee made up of two students from each year was formed. The committee of 24 would meet regularly to discuss ways to keep their energy consumption low.