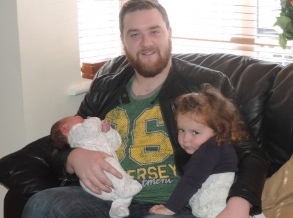 He has only been a new dad for about a week and East Cork Rocker Jamie Stanton is taking it all in his stride. The Voice of Ireland finalist Jamie and fiancée Rebecca Hamilton recently welcomed Karlie May to the world. Born on Saturday last at 4.30 am and weighing 9lbs 9 oz, Karlie May becomes little sister to Bonnie aged two years. The inspiration for Karlie Mays name came from both Jamie and Rebecca’s love of country and western and the fact that she was born in May.

Some people pigeon hole me says Jamie “but I am actually more comfortable doing more soul and blues. My singing was only something recent as I was forced to do it as part of my college work. It was do the singing or not do the course, so I was thrown into a choir.” Jamie admitted that there were a number of students in the choir vocally challenged however he was not one.

When asked what’s next for Jamie Stanton he said he was currently working on an album that he hoped to release soon.

” As I only have a single contract with Universal Studios I need to finance the album myself and depending on how well it performs in the market Universal will refund me. In an effort to finance this project I am performing a concert in the Commodore Hotel in Cobh on the 8 August. Tickets on sale at the door on the night.”

The 24 year old reality TV contestant said he wouldn’t necessarily do a show like the Voice again and admitted to being cyber bullied while on the programme. ”people are purposefully put under pressure to see how best they perform. I wouldn’t do it again as it’s a lot of pressure and sacrifice .”

In the beginning the judges were giving amazing feedback, then suddenly towards the end they changed giving that positive feedback to the more quirky off beat participants. According to Jamie he didn’t feel this a major stress but did say he felt Cyber Bullying was an issue that needed to be addressed with the next seasons contestants.

“I was a victim of cyber bullying during the show. The way I dealt with it was to retweet the negative comments and turn those into positive ones by receiving 1000s of good wishes back. I did however see other contestants take some of their feedback from social networking sites to heart.”

Jamie and fiancée Rebecca Hamilton will marry in Kenmare on the 9th April 2015.