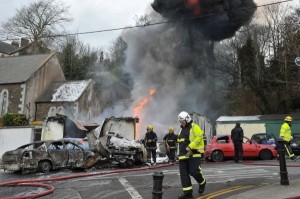 Just before noon on Wednesday 20 March 2013 the people of Cobh witnessed flames and smoke billowing from a premises overlooking the Harbour. The smoke from the fire at Hartnetts Garage was seen as far away as Douglas in Cork City.
It took the fire department over an hour to bring the blaze under control with a utility remaining at the scene for a number of hours to monitor the situation. Almost a year and a half on the charred wreckage of cars remain on site, in plain view of the thousands of tourists that flock to the seaside town.
Since 2008 Cobh Tidy Towns have worked despairingly on improving its image, as being the dirtiest town in Ireland as stated by IBAL (Irish Business Against Litter ).
For the past two years the island town has received a Silver Medal in the annual national Tidy Towns Competition.
2014 maybe the year they lose sight of their goal of a Gold medal despite their continued hard work.
Last year the site was overlooked in the judging as the fire at Hartnetts Garage had just taken place.
This year however it’s a different matter.
Fine Gale councillor Sinead Sheppard assured frontpagenews.ie that the site would be cleared in the next 10 days. “There was initially an insurance issue which stopped the council from acting sooner. We were mindful that a family business had been lost and we didn’t want to interfere with the owners insurance claim.” Councillor Sheppard added that she had approached the Municipal Executive Padraig Lynch on Wednesday 11 June to have the site added to the derelict sites list enacting the Municipality’s power to clear the area. Councillor Sheppard went on to say “on Thursday 12 June the owner of the site contact the council to advise that the insurance assessor had given permission to clear the location. ”
Cobh Great Island Tidy District spokesperson Hendrick Verwey said they “originally considered screening off the site but felt no matter what angle you approached from you would still see the wreckage.” Hedrick went onto say that he “hoped the site would be cleared before judging for this year’s Tidy Towns took place.”