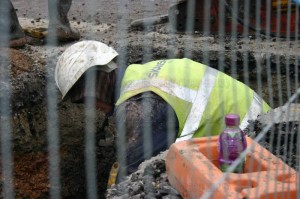 Last Thursday almost 20 businesses in the Coolbawn area of Midleton were faced with the possibility of closing their doors with a loss of thousands of euro.
On one of the busiest days in the market towns week; Cork County Council workers approached business owners while they opened on the morning of 22 May; to advise there maybe some disruption to the water supply.
Business owners were in shock after the unplanned water repairs, as most of the businesses on the street rely on a continuous supply.
According to Margog O’Brien the owner of the Farmgate this is not the first time businesses on the street have been left out of the loop as regards possible water disruption.
“All we want is to be forewarned so we can prepare for eventualities. I have a catering event planned and can’t continue due to the uncertainty of having a water supply.” Margog went on to add “we are all for progress around here, but Monday would have been a better day to carry out these works when water reliant businesses are closed.”
Water is a basic human need when our needs are not met we are put under stress. When you run a business reliant on water this stress is magnified considerably.
Carrie Horgan opened her business Urban Retreat hairdressing in Coolbawn over twelve months ago. In that space of time her water supply was disrupted on three occasions without warning causing her to purchase bottled water in an effort to wash product out of her customers hair.
When contacted by the East Cork Journal, Irish Water, the organisation for managing the delivery of water services to homes and businesses were unaware of any planned or emergency repair works in the Coolbawn area.
A spokesperson for the Council advised that the water levels in the local reservoir were dropping considerably which alerted them to a possible leak in the system. All equipment was deployed on Wednesday night 21 May in an effort to find the area of the leak. A decision was made to install a valve in order to slow the loss of water while they try and source the break in the system. As there was no stoppage to the water supply envisaged no call was made to Irish water to log a fault.
Former Fine Gael Councillor Barbara Murray told the East Cork Journal that she was aware of some problems with communication between the Council and Irish Water and the end user. Mrs Murray went onto say that she “would hope that these issues would be a thing of the past under the new regime. “ That new regime Barbara Murray was speaking of was Cork County Council now being responsible for Government and Administration in the Midleton area.