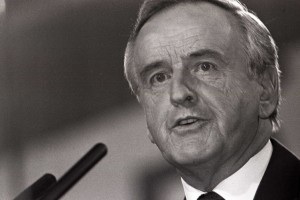 He ran his government like a business run on handshakes, which ultimately left him in the political wilderness.

Albert Reynolds became Taoiseach at the right time for the peace process.

Below is an interview I did with him in 1995 when I was starting out as a young journalist.

Albert was sitting on the opposition benches. It was a time when the peace process had stalled. I asked him about his involvement in the peace process. Apologies for the rookie mistake in not asking him to take the phone off the hook. Thankfully it doesn’t distract too much from the interview.