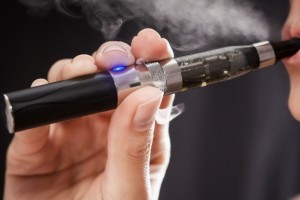 The success of e-cigarettes can be seen in bars and restaurants throughout East Cork.
Smokers who once huddled around outdoor heaters in all weather are now coming in from the cold.
That respite from the elements could soon be short lived.
A recent report published by the world Health Organisation has said that Electronic Nicotine Delivery Systems (ENDS) of which Electronic cigarettes are the most common should be banned in public places. It said “evidence suggests that exhaled e-cigarette aerosol increases the background air level of some toxicants, nicotine and particles laces.”
The health watch dog added claims that these devices help smokers to quit the habit should stop until there is firm evidence to support the claim and that increased legislation was needed around these devices.
The report also focused on advertising saying an appropriate government body must restrict e-cigarette advertising, promotion and sponsorship, to ensure that it does not target youth and non-smokers or people who do not currently use nicotine.
E-cigarettes are creating quandaries for eating and drinking establishments throughout East Cork. Letting a customer electronically light up might turn off other customers.
Rebecca Harte of the Farmgate restaurant in the English Market is reported in a recent Evening Echo article stating “the decision to ban the products was taken because the vapour from the e-cigarettes was “stinking out the dining room. It just doesn’t go with a food culture at all.”
Group owner Marog O’Brien told the Frontpagenews.ie there is currently no decision to roll out this policy to their Midleton branch. “we don’t seem to have people smoke E-Cigarettes in our Midleton outlet. I’m very cautious with over regulation.” she said.
The Irish Government who is subject to the EU 2014 Tobacco Products Directive has two years to implement legislation. Use of E-Cigarettes here increased by 500% between May 2013 and May 2014.
Cobh man Noel stated that “they should be banned in public places , I have used various electronic cigarettes and found them to be highly addictive so much that I was using this and cigarettes.”
Mary from Carrigtwohill said ” I got one a few weeks ago. It’s cheaper than nicotine replacement therapies you get from the chemist but not sure it’s any better for me.”
Gerry living in Midleton said ” I am a week off the cigarettes. I have all the symptoms that you get from giving up except for the cravings. I can only praise them.”