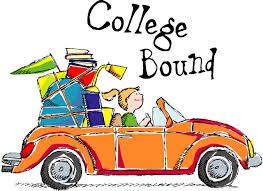 Parents sending their kids to third level are facing an annual bill on average of €7,000 per child.
After putting your child through primary and secondary school the next obstacle for many parents is the cost of putting their children through university or college.
The CAO results were released last Monday, making the opportunity for most a reality, but what are the costs associated for parents. .
Most colleges / universities charge a student contribution fee. In budget 2013 the government announced that the student contribution will be €2,750 in 2014-2015 rising to €3,000 in 2015-2016.
Outside of these registration costs a survey carried out by the league of credit unions of Ireland says 79% of parents supporting their children financially through college, contribute almost €4,000 per annum per child to cover ancillary third level costs.
The survey that asked questions regarding living costs including food, travel, internet, mobile bills and study material found parents are saving for an average of 8 years to put their child (children) through college.
72% say the family budgets have been adversely affected by the third level registration fee.
60% of parents said they will just about be able to manage to pay it.
A further 12% say they can’t afford to pay it and are worried that their child will have to drop out of college as a result.
Only 28% say the increased costs will have no impact on them.
44% of students are now living away from home compared to 32% in 2013 paying on average €346 in rent.
51% of students have to work throughout the academic year to fund their college education, working on average 19 hours per week.
Once college life is finished a parents greatest worry for their child is that they won’t find a job after they finish their course.
According to Barry Treacy of Youghal Credit Union “We offer a special education loan rate of 6% for students who are completing a course in college. The course can be full time , part time or post graduate. The repayments are scheduled to suit the student means. The loans can be borrowed for fess, accommodation , computer purchase or other educational purposes. Loans can also be borrowed to bridge the gap a student may face before their grant is issued. Proof that the member has been accepted for a course is required. In cases the loan may be guaranteed by a parent or guardian. We ask the member to complete a budget to work out how much they expect to spend on a weekly basis and base the loan on this.”