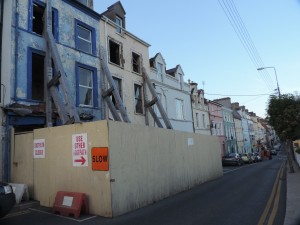 The number of derelict buildings in Cobh has been described as a “disgrace”  by Labour Councillor Cathal Rasmussen.

He told a recent meeting of Cobh Municipality that there are at least  25 buildings around Cobh that he believed should be registered as derelict.

Currently there are only 4 buildings registered as derelict in Cobh.

“We are all talking about tidy towns and the effort everyone is going to. Yet you drive past these buildings and they are a disgrace” he said.
He called for a survey to be carried out on all neglected  buildings.

Mr. Lynch added “you first have to establish who the owner is which in Cobh was always problematic as very few buildings are on the land registry.   The policy the town council adopted in the past  before  serving formal notice was to liaise with the property owner. Sometimes it worked.  The buildings that were put on the register were those where negotiations were unsuccessful or that council were not in a position to do anything with it. Also the policy was to remove properties if they were no longer derelict. So there’s a lot of properties that have come off in the last 5 to 10 years. ” The  Spar Shop in Coolamber  which was previously under the jurisdiction of Cork County Council was on the derelict sites register but was later removed when the owner tidied it up.  It’s believed the  Cobh Municipality will carry out a further survey and will issue  a letter  to the owner in the next  few weeks.  In relation to the buildings close to the  hardware house  on Harbour Hill these are not considered derelict but are dangerous structures  and notice has been served by the town council.

The issue of dangerous structures has become a municipal function Mr. Lynch said he has been asked to prepare a report in relation to the two  properties on Harbour Hill.  This should be issued to the director of services next week.  Councillor Rasmussen told the Executive “these places are very very bad I’m sure you’re working on it but the process seems to be very very slow. I’m sure you’re all frustrated with that. The town councillors before me were equally frustrated by it. I think we need to generate reports. ” Sinn Fein Councillor  Kieran McCarty  said the structure that was put up as a safety measure on Harbour Hill “has itself become a dangerous structure. It’s obstructing traffic. I saw a tourist on an electric wheelchair who had to go out in the road middle of the road because he couldn’t use the opposite foot path. Only because he wasn’t familiar with the place he would have panicked completely. He didn’t even realise where he was going.”

Fine Gael Councillor Sinead Sheppard said  the Harbour Hill structure “was also dangerous for women with prams as they too have to walk in the centre of the road as the footpath opposite is not wide enough to push a pram as there are trees and lamp poles in the centre of the paths” Independent Councillor Claire Cullinane  asked ” if derelict buildings in tourist areas and access roads could be prioritised.”

The Town Executive will carry out surveys on the list of building provided over the coming months.

They have also asked for structures throughout the Municipality to be identified as derelict and will survey them in due course.