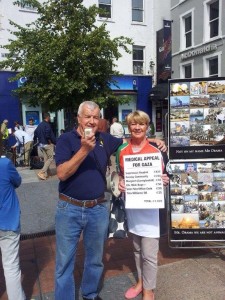 Joan McDermott with a member of the Irish Palestinian Solidarity Campaign

As Israel has agreed to open its borders with Gaza, to allow humanitarian aid and reconstruction materials into the area.
Midleton woman Joan Mcdermott is getting ready to send a shipment to the war thorn enclave.
A new peace deal was struck on Tuesday (26 August ) ahead of indirect talks beginning later this  month between both sides.
The East Cork representative of the Ireland Palestinian Solidarity Campaign has raised over €8,000 in medical and schooling supplies along with €1020 in cash donations.
Last Friday  about €2,000 worth of medical supplies and toiletries were sent to Palestine.
This Friday  a further €6,000 worth of medical and schooling supplies including a wheel chair, bandages, syringes, nappies, incontinent pads, school supplies and stainless steel bowls along with the cash donation will leave Midleton bound for Gaza.
Spokesperson for the Ireland Palestinian Solidarity Campaign James Bowen said ” while the amount Joan has raised is great. There has been huge destruction of Palestine over the past six weeks. This aid will help greatly. While we applaud the work of individuals like Joan, western governments including Ireland, the EU and the U.S. need to massively support the people of Palestine. Recently they abstained on a UN vote establishing a War Crimes inquiry in Gaza. ”
Mr. Bowen added “promises have been made in the past to open borders but they have never been fully opened. These announcements have caused me to be skeptical.”
It’s expected these shipments will reach the people of Gaza in the coming weeks.