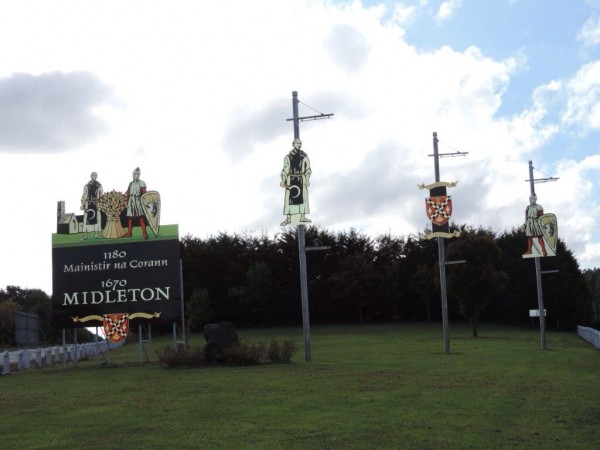 Two new signs on the main access routes into Midleton from the N25 have been erected in the past few days.
The signage was erected in the hope to create and help promote new tourism to the town.
Commuters on the main Cork to Waterford road are presented with a snap shot of Midleton’s beginnings.
A large structure with the dates 1180 and 1670 can be seen. The sign also displays a monastery building in the background with a Cistercian monk, a sheaf of corn and Norman knight holding a shield with a bulls head.
1180 represents the year the local chieftain Mactuima who granted land to Cistercian monks who came from Croom in Limerick to build their abbey.
The knight is to represent the endowment of the abbey by the Normans. Both the sheaf of corn and the bulls head are to represent the importance of agriculture to the town.
The year 1670 is a representation of the first year a charter was signed granting Midleton a manor and court – the origin of local government.
Midleton municipality executive clerk Joe McCarthy said  ” we so often by pass villages and towns up and down the country. These signs are designed to create interest and hopefully attract people to the town of Midleton. Once we attract them in to see what we have to offer we hope to keep here.”