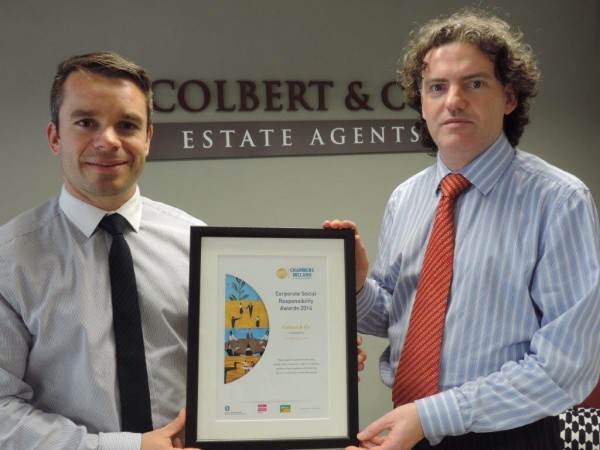 Midleton Auctioneer Colbert & Co came second in the Chambers Ireland Corporate Social Responsibility Awards (CSR) which took place in Dublin recently.
Colbert & Co were placed second for their paperless office with the Carambola kidz foundation which is Irelands leading supplier of healthy school lunches to disadvantaged schools receiving first prize in the excellence in CSR by an SME category.
The Midleton letting agent were up against small and medium sized businesses like BCP asset management. One of Irelands largest independently owned investment product providers. Hayes Culleton international financial training, the recruitment agency Three Q perms who specialise in permanent jobs in the hospitality and health care industries.
James Colbert proprietor of Colbert & Co told the Frontpagenews.ie “this recognition is great for business like Colbert & Co as it sets us apart from other companies out there. By participating in the programme it also worked as a great team building effort.”
John Cunningham, Chair of the Chambers Ireland CSR Awards Judging Panel, told the Frontpagenews.ie “we are always trying to encourage more SMEs to get involved in CSR and Colbert & Co are a perfect example of a successful SME CSR programme. Their commitment to doing their part for the environment has a dual benefit of not only reducing their carbon footprint but also reducing their cost’s in the long term. The judging panel was particularly impressed with the level of staff involvement in the project and the passion shown by the whole team.”