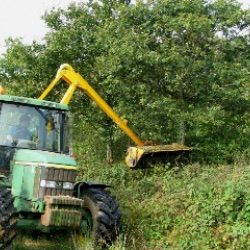 Cobh municipality are to review their policy regarding trimming verges at regional road junctions, following a motion tabled by Councillor Padraig O’Sullivan at the boroughs November sitting.
Councillor O’Sullivan told his fellow representatives that many landowners are shrugging their responsibility when it comes to maintaining the ditches and hedges that surround their lands.
“I know you publish notices yearly regarding this, but I would suggest sending out letters to all landowners reminding them of their responsibility in the maintenance of their ditches and hedges. In the event of non-compliance Cork County Council should reserve the right to sub-contract the work out and bill the offender for works undertaken” he said.
Ger O’Hora Senior Engineer Cork County Council told Councillor O’Sullivan “this is a major task altogether writing out to landowners. First of all you have to establish who owns the land, this means doing a land search. We advertise in the newspaper every year. This is something the area office couldn’t facilitate. The farming organisations like the IFA and ICSA are contacted as well and they are asked to consult with members. “
Mr. O’Hora added “We do identify farmers and we do ask them to cut their hedging, more often than not they don’t do it. It takes months for them to do it and a lot don’t co-operate at all. When we do our road resurfacing we request them to cut the hedging along the road or we refuse to surface the road. Even by doing that we find it very hard.”
Councillor O’Sullivan asked if the wording to the Councils public notices could be reviewed and strengthened.
Municipality Executive Padraig Lynch agreed stating “we have no problem looking at the wording of the public notices, but writing to every individual farmer is impossible.”