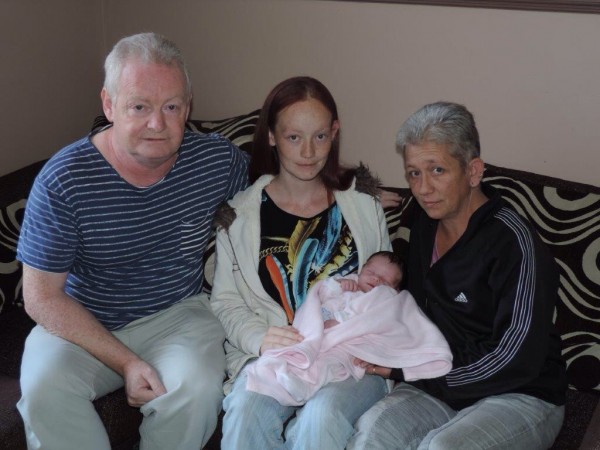 A grandfather from Youghal Tony Horgan says a full time ambulance service should return to Youghal after his daughter gave birth at home.
Toni Collett had to give birth to baby Latoya in their front room on Friday (7 November) while an ambulance was dispatched to their house in Chestnut Avenue.
In 2012 the HSE made changes to the National Ambulance service designed to modernise the delivery of pre-hospital emergency care services in Cork and Kerry.
The service which was responsible for a population of 8,000 in Youghal town and a further 44,000 in outlying areas remained in Youghal, but was made responsible for a wider population. The Ambulance service in Midleton was replaced with a first responder paramedic car, manned by a medical technician on a 24/7 basis.
Under current HSE procedures on receipt of a an emergency call the National Ambulance Service would dispatch the nearest emergency vehicle to the scene.
Mr. Horgan told the East Cork Journal ” we called for an Ambulance at 8:10pm. 20 minutes later we called again to be told an ambulance had just been dispatched from Dungarvan, it took another 25 minutes before the Ambulance arrived. ”
Toni had given birth 8 minutes previously. Mr Horgan added “if anything had gone wrong in the 8 minutes prior to the Ambulance arriving, we wouldn’t have known what to do. Considering the road works in Youghal an ambulance should be put on standby. Consideration of the distance between hospitals and locations should be taken into consideration also” he said.
Fianna Fail Councillor Aaron O’Sullivan a member of the HSE Committee for Ireland South stated “it appears to be a scandalous situation where life has been put at risk. As a member of the HSE Committee for Ireland South I am going to try and seek answers. It emphasises the need for an ambulance service for East Cork.”
Tara O’Connell spokesperson for Save Youghal Ambulance Campaign says “while there are some improvements not all of the promises have been put in place such as strategic placement. An ambulance should be based in between Youghal and Midleton. If that ambulance needed to leave the area another ambulance would be brought back into the vicinity. Rapid response is not being utilised fully.”
O’Connell added “the service is not up to scratch in the area. This incident is just one of many I get on a monthly basis.”
The HSE in a statement to the East Cork Journal stated “The National Ambulance Service can confirm an emergency 999/112 call was received for the Youghal area on 7th November 2014 at 20:42hrs. At the time the call was received a number of emergency resources in the area were engaged on other emergency calls. The nearest available emergency resource was dispatched to the incident and arrived at the scene at 21:15hrs. The National Ambulance Service operates one emergency ambulance at Youghal Ambulance Station on a 24/7 basis and a Rapid Response Vehicle based at Midleton Ambulance Station on a 24/7 basis. The National Ambulance Service operates on a national and area basis as opposed to a local basis. “