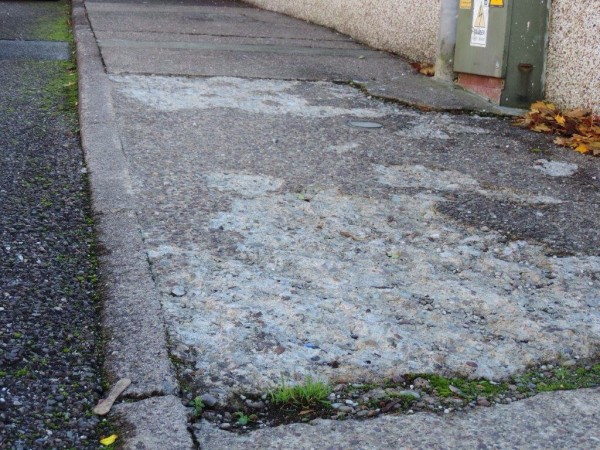 A deputation of the 179 residents of Elsinore heights and rise called for the restoration of broken down footpaths in their area at the November meeting of the East Cork Municipality.
Municipal Chairman Noel Collins told the deputation “this issue has been on the council’s agenda for the past 20 years, with little or no progress other than patch work to date. I hope from your submission today footpath development will commence.”
The resident’s spokesperson Edmund Thompson told the Councillors “Elsinore is a mature estate of about 40 years. In that point it’s a mixture of children and retirees. Elsinore has always fallen outside the town boundaries, so it has always come under Cork County Council, who have to this date have neglected their duty of care.”
In most parts of the estate, you will find pavement blocks either loose, sunken, broken or uneven. Certain stretches are bad and force people to avoid them totally.
Mr Thompson continued to tell the councillors “we are quite aware of the current financial constraints Cork County Council are working under. We have gone through 2 recessions and a boom in the that time Cork County Council have dragged their heels and not delivering on promises they’ve made. The foot paths need to be fully reconstructed. If it comes down to financial reasons consider this. The average pay-out for someone falling and sustaining serious injury is well above the overall cost of reconstruction.”
Councillors Michael Hegarty, Pat Buckley and Susan McCarthy all voiced their concerns regarding the condition of the foot paths in both Estates.
Councillor Collins advised Mr Thompson “Edmund you have made a very constructive case as it exists at ground level. Engineers are very well aware of this problem but will bring councillors and residents up to date with a full written report on your current submissions to be available at our December meeting and will subsequently be forwarded to you. This time around there should be no financial excuses for not progressing this development taking into consideration the millions of euro collected in property and other taxes.”
The overall length of foot paths in Elsinore is 1.9 KM in excess of 1 mile. Rehabilitation works were carried out in 2011 on approximately 200 metres and some localised reconstruction of defective areas and a further 50 meters in 2012. This year for the first time Midleton Municipality actually have a footpath programme of €125,000. The municipality have completed 7 or 8 locations in Elsinore Heights and Rise. There is a further 50 meters in Elsinore to be replaced under the foot path programme. The reconstruction of the remaining 1.6 km is expected to cost in excess of €150,000.