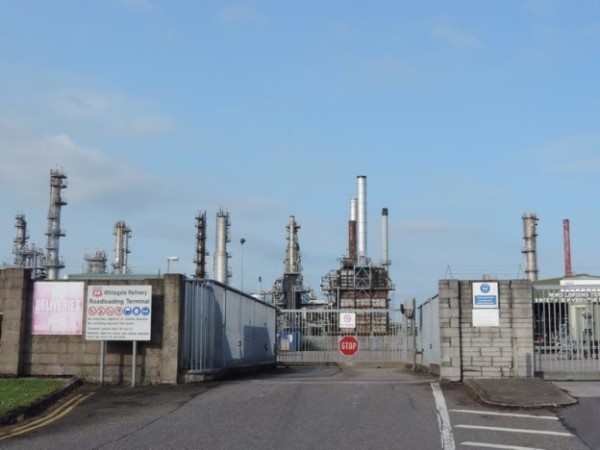 Independent Councillor Kieran McCarthy has called on the government to help fuel the growth in the biofuels industry.
The Cobh based councillor warned that the age of Carbon is over and a transition to a greener economy is inevitable.
With Whitegate Oil Refinery being offered for sale again, over 600 East Cork jobs could be lost if the government doesn’t act soon, he said.
The expiry of a contractual agreement between the government and the facilities current owners Phillips 66 has cast doubt on the future of the work force.
Speaking to the East Cork Journal, Councillor McCarthy urged the government to explore emerging alternative energy opportunities that will benefit Ireland and be sufficiently scalable to have a positive global impact.
Contrary to the Government’s argument that it is powerless when it comes to securing Whitegate’s future, McCarthy said under EU regulations the State can invest in the facility through the EU life plus programme.
Under the EU, the investment by the State in greener energy alternatives would be classified as being off the Government balance sheet and would give the company the stability it needs and at the same time help meet Ireland’s goal in reducing its Carbon footprint.
The Whitegate facility has always struggled to compete with the European markets.
Last April the company withdrew the premises from sale and recorded pre-tax losses of €48.47 million.
Directors at the Whitegate facility blamed the loss in revenue to speculation in the futures market, (where refiners buy crude for a price agreed upon today (the futures price) with a delivery and payment occurring at a future point).
Last month Phillips 66 relisted the refinery for sale as demand for their product has picked up and the cost of crude oil has fallen.
McCarthy said that he feared that if a buyer is not found this time around, the facility will be sold off “piecemeal.” “The jetty will be sold off as a deep water berth and the remainder of the facility bit by bit. The site will never return to a greenfield site, it will be ten times worse than Irish Steel” he stated.
Under EU and IEA rules Ireland is obliged to maintain 90 days reserves of national strategic stock.
We have 100,000 tonnes in a combination of both crude and refined products at Whitegate and a further 550,000 tonnes of refined products at Whiddy Island and no crude.
The Cobh based councillor stated “because of international turmoil and the vagaries of a controlled energy market there are no guarantees of supply or costs to the consumer.” “If the plant closes, how do we as a country guarantee our people continuity of supply?” he asked.
Currently Whitegate accounts for 30% of all energy supplied in the State.
The port of Cork have publically stated that they wish to grow the harbour as a major energy hub similar to Aberdeen in Scotland. Phillips 66 is the ports biggest customer in that just under 50% of the traffic goes to the Whitegate Oil Refinery, which equates to 30% in Revenue.
Speaking to the East Cork Journal Michael McCarthy the Ports Commercial Manager stated “the loss of the facility would be catastrophic to the area, we would encourage the government to do everything in their power to make it attractive for Phillips 66 to stay.”
A Government spokesperson stated “a refinery sale would be a commercial matter between Phillips 66 and a potential purchaser. They added the Government views the continued operation of the Whitegate Refinery on a commercial basis as highly desirable from an energy security and economic perspective. Security of supply remains a fundamental tenet of our energy policy.”
The Government spokesperson added, “a recently published white paper on energy aims to make Ireland Carbon Neutral by 2100”.
Within the document are a number of tax breaks and grants to encourage the adoption of electric and gas vehicles.
Communications Energy and Natural Resources Minister Alex White said “for the first time an Irish Government has set its course on the eventual elimination of fossil fuels from our energy system.”
“We will only achieve this ambitious degree of decarbonisation by engaging all citizens in energy policy and its implementation” he concluded.

East Cork, Politics
One comment to “The State Needs To Rethink Its Strategy On Whitegate”