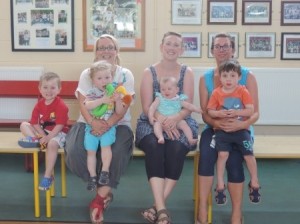 Last week we reported that the Castlemartyr Parent and Toddler group were moving location for two months due to teacher and classroom changes at Castlemartyr National School.
With a population of over 2,500 people in Castlemartyr and the surrounding area residents have no permanent place to run their activities during the day and rely totally on the good nature of local business.
When the Carmelite Monastery was sold to a hotel chain the nuns donated some proceeds of the sale to the Parish to provide a focal point for the community.
In 2005 the Imogeela Community Sports Hall Ltd. was established to raise further monies and identify a suitable location.
Originally a site was identified in Castlemartyr village but later fell through.
According to Fred whelan-Curtain chairman of the Imogeela Community Sports Hall Ltd. ” A new site has been identified in the Mogeely area, contracts should be finalised shortly.”
Mr. Whelan-Curtain added that it’s his “vision to provide the parish of Castlemartyr and surrounding areas with a Multipurpose centre with an influence on physical activity.” Mr. Whelan-curtain went on to say “I want the new facility to cater for as many community groups as possible while also catering for nonmainstream sports.”
At present the Imogeela Community Sports Hall Ltd. are awaiting to apply for the next round of Sports Capital funding.
It’s believed the next round of funding will be released in 2017. Funding is generally given out through Sports Capital Programme every 3 to 4 years. The last round of funding was 2013/2014 which had an application deadline of 17th January 2014.
Sean Scott-Baird Secretary of Castlemartyr Community Council says their group met with representatives of the Imogeela Community Sports Hall Ltd. last July with an express desire to combine their efforts in providing the area with a centre. Mr. Scott-Baird told the frontpagenews that “despite numerous requests and letters to the Imogeela Sports Hall Ltd. no further communication has been forth coming.” Mr. Scott-Baird added “in light of no action in 10 years on the hall and no communication in twelve months it was decided to crack on, on our own as we are now entering the consultation period with community groups before we progress further with our application. it’s the groups’ mission to provide Castlemartyr and the surrounding area with a community centre.”
“We are very aware of the chronic need for a community centre in the village. It has been high on our agenda since we took our positions. A number of our members are currently attending SECAD courses regarding accessing finance and services to help this become a reality. Through this relationship we hope, soon, to undertake a feasibility and costing survey on the site of the old scout hall.”
Recognising that there is a shortage of public facilities available to community groups Sean added “the people and business of Castlemartyr continue to show considerable community spirit and we would like to use this opportunity to thank The School, Castlemartyr Resort, The Village Greengrocer, Clifford’s Bar, Shortt’s Bar and Bluebell Café for their constant support in allowing us use their premises and facilities to hold various meetings and events. Their constant support is invaluable and we thank them all sincerely.”