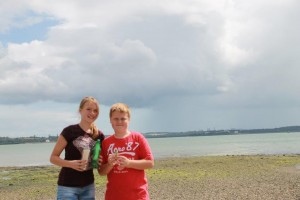 Finding a message in a bottle can be very exciting but to find three bottles is exceptional.
That’s exactly what happened Ruben and Nina Carlos.
The two who are visiting from Saudi Arabia volunteered with their aunt to clean a section of strand near Carrigaloe with Cobh Tidy Towns, when they came across 3 bottles each with a message.
One letter purporting to be from Canada was written by Kyle, Sophie, Lily and Leah revealed their secrets.
Kyle always wanted to fly a plane, Sophie always sought after a pet dog, Leah always dreamt to be a hairdresser and Lily always asked for a pet cat and dog.
The second bottle found was a lucky wishing jar filled with small green shamrocks. Inside it read ; “I wish for the knowledge of strength to know who I am, what I want and live accordingly. I wish for clarity and peace. – D.P. 2001.”
In the third bottle they found a note from Ava telling them she had a brother named Warren.
Both Ruben (11) and Nina (13) are trying to trace the owners who put the bottles into the sea to try and grant their wishes.
According to tidal experts at the Port of Cork it’s very difficult to pin point the bottles exact entry into the water. It’s quite possible these bottles came from Canada but very unlikely.
The area where the bottles were discovered is the main tidal channel to the city. The bottles could have entered the water at any of the rivers estuaries or in fact could have come in through the harbour they said.