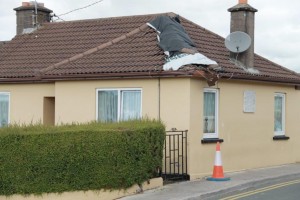 This was the damage caused after a lorry backed into the side of a house in Rosary Place in Midleton on the morning of Monday 11 August. A truck delivering building insulation to the Midleton CBS building project backed into the side wall of the property causing major structural damage and took out a portion of the roof.
The property in Rosary place is being rented by a Dublin woman and her daughter. The lady told the Frontpagenews.ie that she had two visitors in the house at the time when the incident happened.
” I was in the sitting room picking something up when I heard a bang. I looked up and saw the truck. I went out to have the driver stop but couldn’t get out the gate as he kept backing in. The anti-water protestors ran up and started shouting at him to stop and he eventually did.”
The building that has possibly thousands of euro’s worth of damage was assessed by an engineer on Tuesday 12 August. It is hoped repair works will commence shortly.