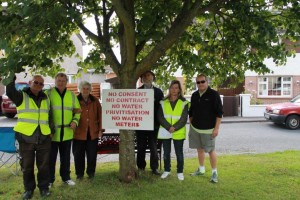 Residents in the Castleredmond / Rosary Place area of Midleton are the latest to object to the installation of water meters. The group were advised last Friday 8 August that installation works would commence within 3 days of Monday the 11 August.
The group made up of 5 families say “Irish water have no consent and no contract to install these meters. The uncertainty of what is coming down the tracks is what we are objecting to. Most of us are old age pensioners. The Engineers that are currently working for Irish Water were transferred from the County Councils. These people were responsible for the maintenance and upkeep of the water system that is currently losing 40% daily. In essence they have washed their hands of their failings and want the Irish citizens to pay for their mistakes.”
The group added that “the government have taken a public owned resource and privatised it. Irish water will put in smart meters so no one will need to read them. If we have a query regarding a bill no one will be available to talk to, if you want to question the bill. We have already paid for water in our taxes.”
At present the Ombudsman Peter Tyndall is unable to investigate complaints against Irish Water.
A spokesperson for the Ombudsman told the Frontpagenews.ie “since Irish Water was set up as a subsidiary of Bord Gais the complaints mechanism has been placed outside the remit of the Ombudsman and therefore complaints cannot be investigated by our office . Until the Irish Government amends their legislation unfortunately the Ombudsman can’t investigate complaints against Irish Water. ”
The spokesperson added “since March Irish Water are subject to the freedom of information act however this cannot be used as a complaints procedure.”
People can however make a complaint to their local council although they may be referred to Irish Water with their complaint.
In a statement released to the Frontpagenews.ie Irish Water said it “respects the right to protest and endeavours to facilitate this right in so far as is reasonably possible, while maintaining the safety of the staff, the public and the site of work, which is a primary concern for Irish Water.

Irish Water would like to reiterate that from October 1st, when billing commences, customers with a meter will be billed based on their usage while customers without a meter will receive an assessed bill which will be based on a close approximation of water usage. Domestic water charges are being introduced based on commitments in the Programme for Government, and the Memorandum of Understanding between the Government and the EC-ECB-IMF for the Programme of Assistance (2010-2013). Relevant legislation (the Water Services Acts 2013) has been enacted to empower Irish Water to both install meters and charge for domestic water and wastewater services.

There are currently over 340,000 meters installed, with meters being installed at a rate of 32,000 per month. Irish Water is on target to have over 1 million meters installed as part of phase one of the metering programme due for completion by mid 2016.
Where a customer receives one but not both services (water supply or wastewater), the charge will be for that service only. Householders are free to remove themselves from this liability if they have their publically treated water and waste water connection disconnected.
Domestic water charges will apply from the 1st of October 2014 with the first bills being issued in January 2015. Irish Water, will be writing to customers from September, seeking information that will allow everyone who is on the public water network to avail of all free allowances that they are entitled to. Irish Water has a dedicated customer service line open 24 hours a day where people will have the opportunity to make any enquiries in relation to bills etc. This service can be reached by calling 1890 278 278. “