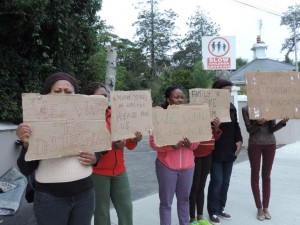 “I never dreamed it would turn out this way”

Ashbourne House in Glounthaune is the fifth reception centre to protest over the direct provision system.
Many seeking asylum here would have fled their country in terror leaving behind family, friends money and a job. For those arriving in a foreign country there is always a need for transitional housing before they are integrated into the community.
For many of the 90 people residing in the Ashbourne Centre that transitional period has lasted over 9 years.
The issue here is not about food like those in other reception centres. It’s about the right to third level education and the right to contribute to the community.
Direct provision centres were established here in April 2000 as a means of meeting the basic needs of food and shelter for asylum seekers while their claim for refugee status is being assessed.
By putting those seeking asylum in these provision centres we unwillingly create a second form of oppression.
The number of foreign nationals seeking asylum here has increased by 40% this year. The Department of Justice say they’ve received 854 applications between January and August compared to 607 for the same period in 2013.
The Irish Refugee Council say direct provision is not fit for purpose. A spokesperson told the Frontpagenews.ie “Ireland is not in line with other EU states when it comes to refugees. An asylum seeker is assessed under two processes. Refugee protection and subsidiary protection. In other EU countries both processes run in tandem. In Ireland you first have to exhaust the refugee protection process before seeking subsidiary protection. If you are refused refugee status you can appeal the decision to the high court and then a judicial review. If the judicial review finds a wrong decision has been made your refugee application goes back to stage one and the process starts all over again. ” The spokes person added “Ireland has a poor track record in making decisions. It’s not unusual to have somebody in the system for over 9 years. The average application is 3 -4 years. In other countries when an application is taking awhile to process the asylum seeker is allowed work. That’s not the case here in Ireland.”

The spokes person went on to say “we would call for the immediate introduction of a mediator for new people entering the asylum seeking process. We would also like to see a complete overhaul of the system modelling it on the EU Minimum Standards Reception Directive”

The Minimum standards reception directive was agreed in January 2003 during Irelands presidency of the EU. However Ireland never signed up to it. This Directive sets out minimum standards of reception conditions for asylum applicants. The aim is to ensure that the applicants have a dignified standard of living and that comparable living conditions are afforded to them in all Member States. At the same time, the Directive also limits asylum applicants’ secondary movements.

Currently Under the direct provision scheme adults are paid €19.10 per week and children €9.60. This money is to pay for travel into the city, lunches for school and travel to Dublin to meet the Justice department.

Vivienne a resident of Ahbourne House for over 8 years told the Frontpagenews.ie “families are forced to live in cramped hotel rooms. Some rooms have three and four people sleeping in the same bed. Children struggle to find room to do their home work. Many of the children here have not known life outside of this centre. We want to be able to integrate into the community. We want to work and pay taxes. We don’t care about social welfare. ”

Gabriella an 18 year old from the Democratic Republic of Congo has lived at the Ashbourne Centre for 8 years. She has gone through both primary and secondary school here. She told the Frontpagenews.ie “all I want to do is go to college or university but I can’t do that as I can’t pay the non EU fees and don’t have the right to work.”

Justice committee spokesperson East Cork Deputy David Stanton said he was fully aware the direct provision system is not working. “The government are currently working on a bill to reduce the length of time the applicant spends in the system through the establishment of a single applications procedure. The Protection Bill is due before government early 2015. I am pleased that the first steps towards a full review of the asylum process by a working group began last week with a round table consultation on Thursday 18th September. I believe a debate on this subject is long overdue.”