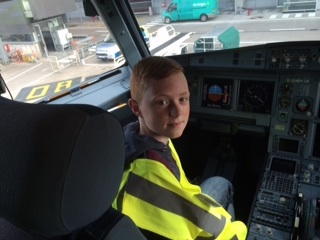 11 year old Kyle Hegarty got his wish to be a pilot with Aerlingus last Sunday.
With help from the Frontpagenews.ie the young boys dream to sit in the cockpit of a plane became reality.
kyle w as one of the authors of the message in a bottle that was picked up by Nina and Ruben Carlos when they were helping their aunt and Cobh Tidy Towns clear a section of strand near Carrigaloe.
The letter written by Kyle, Sophie, Lily and Leah revealed their secrets.
Kyle always wanted to fly a plane. Sophie always sought after a pet dog. Leah always dreamt to be a hairdresser and Lilly always asked for a pet cat and dog.
The letter which purported to be from Canada was in fact dropped into the river in Passage West. It then made its way across river to carrigaloe when it was picked up by the two kids assisting Cobh Tidy Towns.
We hope to grant Sophie, Lilly and Leah’s wishes in the coming weeks. keep an eye out in the Frontpagenews.ie