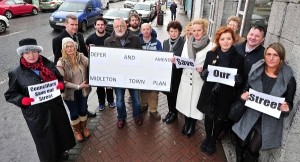 Local businesses are calling for the Midleton Flood Relief works to begin in an effort to help stop flooding in the Owenacurra river that runs through their town. Funds were provided by government following the extreme flooding in July 2013 that affected Midleton and Ballinacurra.
The money in the form of grant aid from the Office of Public Works (OPW) was announced in October 2013. Plans for the relief project were to be completed by the end of last year.
The OPW approved €19,000 for Cork County Council, for the completion of the Midleton Northern Relief Road Study in March 2013.
€23,880 (€18,000 in 2009 & €5,880 in 2010) was allocated for the installation of a debris screen in Ballinacurra to alleviate flooding due to culvert blockages but these have proven to be insufficient.
Despite these works carried out by Cork County Council, many homes and businesses in these areas still experienced serious flood damage in July 2013, at great cost to the owners.
The flooding of July 2013 had resulted from heavy rainfall and insufficient capacity of the surface water drainage system. Numerous weather warnings were issued at the time.
A spokesperson for the OPW told the Frontpagenews.ie “There is a proposal for a flood relief scheme for Midleton arising from a recommendation in the Lee Catchment Flood Risk Assessment (LCFRA) . This is at an early stage at present – we will begin the process of appointing consultants to progress it shortly. Each scheme goes through extensive public consultation and detailed analysis/design processes, so it is not possible at this point to give an estimate of cost or timescale for commencement of works.”
It is understood the draft plan for Midleton and Ballinacurra could include permanent floodwalls and/or embankments to manage both tidal and fluvial flood risks.
According to a Seamus Cunningham President of the Midleton Chamber of Commerce ” the need for flood relief for the Midleton area has been proven over the past number of years. We as a group would like to know who in the interim indemnifies premises against flood damage while we await the protectors to carry out their job.”
East Cork TD David Stanton told the East Cork Journal ” no insurer would indemnify a sure thing. projects of this nature need to go through broad public discussion and in depth analysis. We need to ensure that these works are carried out to the highest standards to ensure no further flooding in the future. I will be writing to the Minister for the OPW Simon Harris and Cork County Council Chief Executive Tim Lucey to try and get the project pushed along.”