Cork County Council has awarded €150,000 to 65 community groups to fund various projects throughout the county.
This is the last year the community grants will be given out at county level. The funding that is available will be distributed at municipal district level from 2015 onwards.
16 East Cork organisations were successful.
The grants cover works that range from lawnmowers and plants to sports and musical equipment.
At Monday’s Southern Committee meeting councillors expressed their concerns in the way the funds were divided. Many of this year’s amenity grants were given to organisations which would historically receive funding through local council grants for the arts and tidy towns.
Glanmire did well in the money stakes with Cobh and Midleton getting less than expected.
Midleton Independent Councillor Noel Collins told the executive ” For the past 10 years the town of Midleton was getting €300 for the paupers grave yard, a 3 acre famine grave yard, but this year they were looked over. The Midleton Men’s Shed got nothing this year but Blarney Men’s Shed did. What’s the difference.”
In Cobh councillor Claire Cullinane expressed her concerns when funding for a sound system in the promenade was rejected. “Cobh promenade welcomes hundreds of thousands of visitors a year. We end up having to rent a sound system for €200 at a time, €500 would have let us purchase an all weather sound system.”
Maurice Manning Senior Director of Services told councillors ” There is a maximum grant of 6,500 its very rare that groups would get the maximum amount through the scheme. The scheme is always over prescribed.
It’s never a case we can give groups what they need. The criteria is where an applicant has sufficient funding in place that would be matched with what the council could.
We can list all the applicants and advised why they were not acceptable ” he said.

The 2014 Amenity Grants For East Cork are as follows: 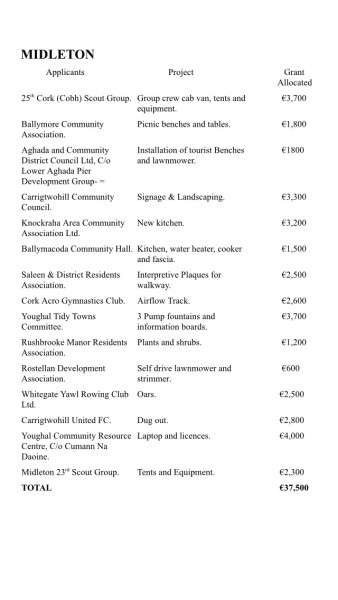 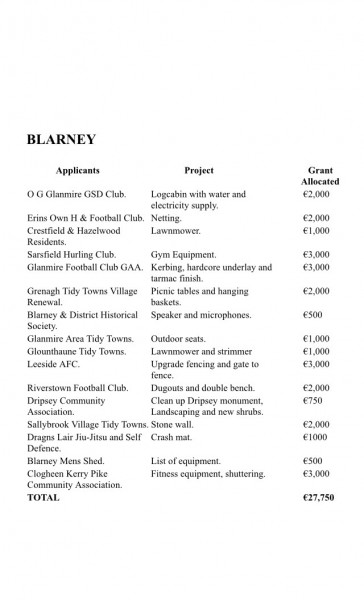