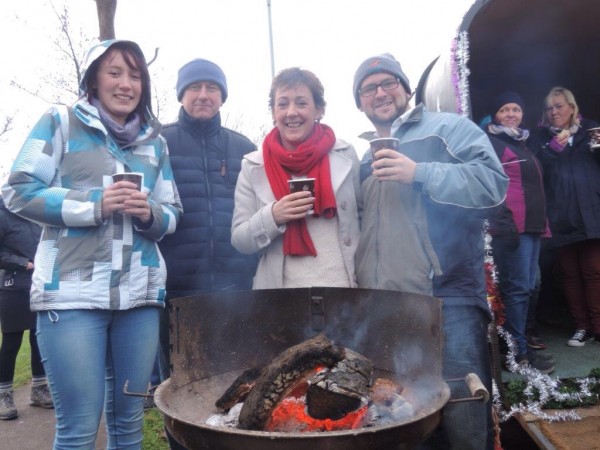 On a day that Taoiseach Enda Kenny headed North to replace one political hot potato with another, last Thursday (11 December) the Detroit Water Brigade made their way to Cobh to stand in solidarity with the Cobh Says No to Water Charges campaign.
The groups message to the anti-water protestors was clear. ” Let Detroit be an example of the future of the water system here. We understand that this is where the titanic last saw land and the titanic sank and you must sink these taxes.”
Atpecie Makita added “We are anti privatisation of water it should be a public utility not free because somebody has to process it. somebody has to service it. We understand that, but should people be charged twice? should they be charged overage? My understanding is it doesn’t cost anymore to produce a cup of water then it does a whole gallon of water. ”
The city of Detroit, Michigan filed for Chapter 9 bankruptcy on July 18, 2013. It is the largest municipal bankruptcy filing in U.S. history by debt, estimated at $18–20 billion
15,000 families who are more than two months overdue or owe more than $150 currently have their water service shut off.
At the height of the summer that figure was close to 50,000 disconnections. Detroit water and sewage officials state that most households were reconnected within 48 hours of paying overdue bills or agreeing a payment plan.
Earlier this week the Water Charges bill 2014 was stalled in the Dail. Focus was on section 7 which has 16 sections.
For the past 3 months a group of 300 anti-water protestors in Cobh have prevented Irish Water from installing meters on their island. From 6:30am teams from Cobh Says No to Water Charges set up surveillance units at Belvelly Bridge and the Cross River Ferry (the only access points onto the island).
Group spokesperson Karen Doyle told the East Cork Journal “the spotter units would then message members which estate is likely to be targeted by the contractors.”
Later today (Thursday 18 December) the WaterCharges bill will be sent to the upper house, where the government is in minority, where they are hoping to get the backing from independents.
If the bill does not pass through the Seanad it could see politicians recalled over Christmas to have it amended.
Atpecie told protestors “160,000 foreclosures are coming down the pipeline. They didn’t shut down the big commercial businesses which owe them huge money. Water services should be delivered through direct taxation.” .
Schamiyineen Harris of the Detroit Water Brigade warned the Cobh Says No to Water Charges Camapigners “In Detroit we have had meters for a very long time, and the fear here is that once you get meters here it’s a rap it’s all over they will have the ability to raise water rates to whatever they want to.
I’m telling you this is the wrong road to go down especially with these meters.
A meter is equivalent to a cash register it is just there to clock you and to tally and from my research once you get the meters in by April 1st you are already in debt for the next 9 years.”
The American Anti-Water Charge Camapigner went onto say “Stand up for what you believe in or fall for anything stand for what you believe in. if you believe people being cut off from water is ok then go ahead and get a meter. if you know better then go do better.
whatever debt is left most of the people here today probably won’t feel the effects of it. that baby right there is going to have to pay for the rest of his life why.