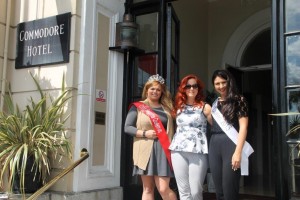 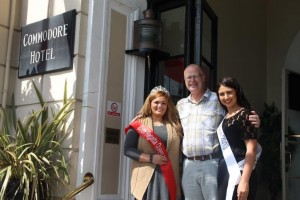 When the winner of the 2014 Cobh Peoples Regatta was announced recently Courtney O’Sullivan wasn’t sure if she had heard correctly.
” Harbour Browns restaurant put me forward for the queen. I wasn’t thinking about winning. I was thinking of having a good time. It was a great surprise when my name was called.”
Courtney daughter of Michael and Jackie O’Sullivan from Ballinoe was one of eleven young women vying for the crown.
In addition to Courtney winning the overall prize, Caroline O’Connor won Miss Congeniality with Rachel Hally winning Miss Hair and Make Up.
As winner O’Sullivan – a final year student of Food Science with Business at Waterford Institute of Technology won a Tiara, bouquet of flowers, a silver frame with profile, €400 make up course , €250 cash and the right to represent the Cobh Peoples Regatta at the Cork Rose of Tralee selection.
When asked Courtney said she was excited about the year ahead. All eleven girls in the recent pageant were judged on an interview and public speaking.
Courtney takes over the crown from the 2013 Cobh Peoples Regatta Queen Shauna Sisk.
Shauna who started an anti-bullying campaign on national print and broadcast media last year told the Frontpagenews.ie that for her the taunting never seems to go away.
Shauna was bullied at school for almost two years because of the colour of her skin. “My sister persuaded me to enter the regatta queen and to stand up to the bullies. To show them that they were not going to win and to get on with my life. There’s one thing being a keyboard warrior but when they’re in your face that’s another thing.”
When Shauna went out to celebrate with Courtney after winning the 2014 regatta queen she was taunted by the same group who had bullied her during her school years. “Girls kept staring over at me, I couldn’t ignore it. I had to leave the venue. Walking along town towards the taxi rank they kept shouting at me ‘do you want to start a fight.’ I broke down and had to get my mother to come and collect me. I have had counselling in the past for the bullying, you can get very paranoid” she said.
Shauna who works for Bershka in their Cork store is currently preparing to move to the UK to study music and drama where she hopes to be treading the boards of the West End some day.
Shaunas’ advice to people being bullied is to “stand up to the bullies, don’t let them win. Get on with your life.”
If you are being affected by bullying you can contact the Samaritans on free phone 116123 or email joe@samaritans.org for a listening ear. Spunout.ie and Reachout.com will give online help.