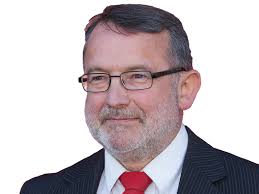 Cobh Municipality Cllr Diarmaid O’Cadhla says the government needs to reassess Irelands risk of being targeted by Jihadist Extremists, following the recent visit of the USS Donald Cooke.
The Independent Cllr told the April sitting of the borough, the harbour’s long relationship with US military had “endangered the lives of Irish citizens by offended peoples throughout the world, who have been victims of attack by US military.”
The Irish language activist made his comments following last month’s stopover of the Naval Destroyer, which was in the harbour town on a five-day planned visit to enhance US – Irish relations.
The vessel with nuclear capability was encircled by a ring of steel and access to Cobh’s Five Foot Way was sealed.
Councillor O’Cadhla a member of the People’s convention said the ship which has taken an active part in US – NATO led wars had compromised Ireland’s status as a neutral country.
The Independent Cllr told the sitting, the Irish Government had a number of questions to answer and asked that a letter be sent to the office of An Taoiseach to clarify what checks and balances were carried out, to ensure the visiting ship was not carrying any weapons of mass destruction.
Speaking to the Frontpagenews.ie Cllr O’Cadhla said “the presence of such a warship in the harbour makes a mockery of our neutrality, as does the continued use of Shannon Airport by US military.”
“In fact, this type of collaboration with the US and NATO war effort exposes Irish people to attack- even though, as a people, we never agreed to such support for wars of aggression.”
The only member of the Cobh Municipality to back his motion was Independent Cllr Kieran McCarthy.
Cllr McCarthy said while he welcomes the visit next month of US warships to Cobh, commemorating the centenary of US involvement in the Great War and their arrival in Cork Harbour, he opposed the visit of the USS Donald Cooke.
“Why are they here? Certainly, in my eyes its nothing to do with courtesy visits. It’s nothing to do with enhancing tourism. It has nothing to do with the political and financial welfare of the people of Cobh.”
“I do welcome the historic engagements we are going to have in the next few months regards the centenary of the first world war, they are two totally different issues.”