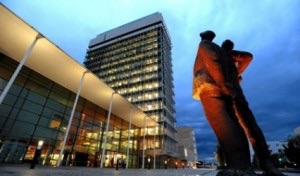 Cork county councillors have approved a budget for 2015 worth in the region of €289.2 million.
This is a reduction of €34.3 million on last year’s budget. At Mondays budget meeting Head of finance Liz Barry cited the decrease due to the transfer of water functions to Irish water and the phasing out of higher education grants through the council.
For over 30 council members it was their first budgetary process, and the first budget cork county council had with an amalgamation of 13 authorities (9 town councils, 3 town commissioners and cork county council.)
For many it was a pro business, pro community and pro family budget. For others it was a stark reminder, had they not reduced the local property tax by 10% in September, more could have been achieved. Some extra monies were discovered following the amalgamation of the 13 authorities, 2016 onwards will be the real test for the local government reform act.
This year’s budget was built on five pillars; A five year Rates relief Scheme, especially targeted at small to medium sized family businesses providing 5% relief to 65% of businesses in the county for 2015. Some 10,000 rate payers will gain from this. County rate payers will receive a 5% relief up to a maximum of €3,000 annual rate bill. The maximum relief in year one will be €150. The refund will be subject in payment in full and the reduction will be applied to accounts at year end. The relief will be graduated over 5 years to 2020, going from 5% to 1% in each subsequent year.
Annual Commercial rates have been set at €74.75 until 2020. The county rate payers and the town rate payers though will pay the same rate in 2015 as they did in 2014. In affect rates harmonisation will not come into effect until 2016. What this will mean for rate payers is by 2021 everybody will be on an annual variable rate of €74.75. currently this rate has been maintained for the past 8 years.
Housing maintenance Increase by €1.4 million, bringing it to €7 million. An Additional €300,000 will be put towards housing maintenance and €350,000 towards a boiler maintenance programme.
The provision of €1 million is going towards supporting local town development through a variety of options. These monies have been set aside to support business initiatives, to carry out town enhancements, co-ordinate with local partnerships & support tidy towns throughout the counties municipalities in the form of a town development programme.
Municipal District Allocation will be increased from €1.356million to €1.819 million to provided for the support of Municipal District discretionary spend. A further payment of €400,000 was also given as a dividend to the 8 towns that currently have the facility.
Youghal and Cobh the only towns in East cork to operate paid parking received an extra €50,000 as one off payment added to their discretionary grants package increasing Cobh’s contribution from €176,200 to €208,000. The East Cork Municipality incorporating both Midleton and Youghal will receive €231,200 for local charities and organisations in 2015.
Economic Development Fund increased to €1.07 million
In the Local property tax cork county council were given an allocation of €33.4 million. A resolution on the 22 September to vary the local property tax by 10%, saw that amount reduced by €4.18 million. That amount was divided between capital and revenue. €11.8 million was put towards the housing capital allocation for 2015. The balance of the €17.452million was assigned to general purpose grants.