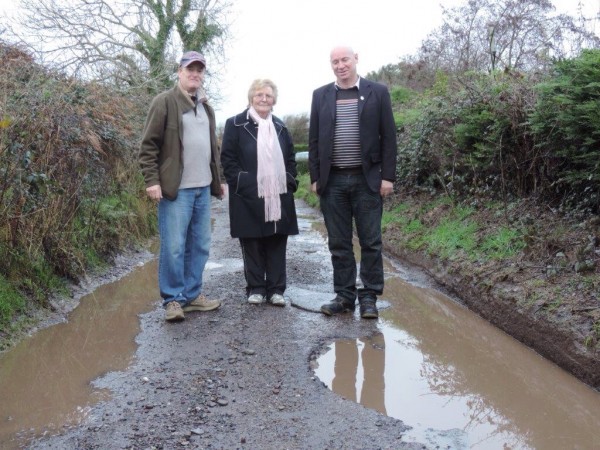 It may only be 1km long, but life on Cashman’s Boreen in Ballydanielmore Cobh, is a struggle for the 18 families that live along it.
Peppered with potholes residents no longer have family visits and some waste collection agents refuse to use the road due to treacherous conditions.
Parts of the road are heavily littered with crater like potholes and over grown vegetation.
Councillor Kieran McCarthy told the East Cork Journal “Cobh Municipality promised me in June to fill in the potholes while they await further funding to relay the road.”
6 months on and the situation has worsened, with no action taken by the borough to carry out the remedial works promised.
The Sinn Fein Councillor added “I don’t blame the town engineer, it’s central government where the issue is. How can you call on people in society to pay their taxes, and then withdraw the service they are paying for, saying there are no funds available.”
Local resident Paddy Fouler said ” We are all 100% tax compliant, all we want is a road. The last time the road was resurfaced was 1995. It was like the M50 for a while.”
Marie O’Donnell who has lived on the lane since 1993 stated” the road has been getting slowly worse for years. A culvert was put in last year but hasn’t improved the situation. Heavy farm traffic use the road daily, which is adding to its deterioration. Cars are damaged on a daily basis because of the state of the road.”
Cobh municipality senior engineer Robert O’Sullivan stated “the borough has carried out some remedial works on two occasions this year. Finance is a big issue with us, with our roads budget cut by 40%. We have to prioritise the local primary roads first before we look at others.” The cost of relaying Cashmans boreen is around €75,000. It seems there is some consulation for these residents, who daily have to drive along the bumpy dirt road, mud and minefield of potholes. The senior engineer told the East Cork Journal “funds can be sought through the governments ‘community involvement scheme’, which would see residents cover 20% of the total cost.”