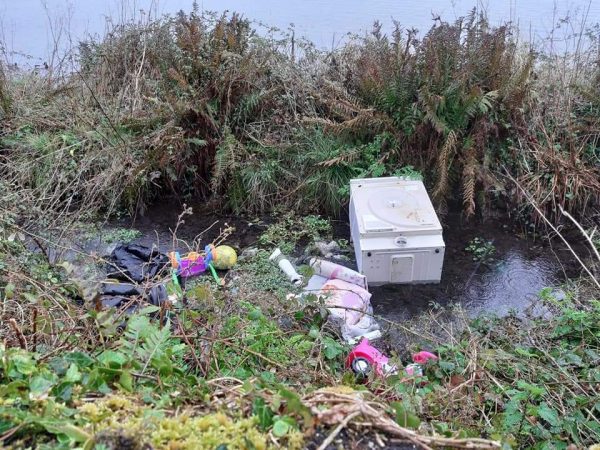 A large amount of rubbish containing a domestic appliance, childrens toys and other waste, was found dumped at a Cuskinny wildlife reserve in recent days.

A Birdwatch Ireland employee discovered the waste when carrying out a regular check of the area.

The wildlife trust say this follows another find discovered earlier this month at the same location, where a plastic tùb of dog fish were left near the metal lock up shed used by Cobh Tidy Towns.

Both incidents have been reported to the litter warden.

On their social media page Bird Watch Ireland who manage the wildlife sanctuary said the group were surprised what they found.

The reserve was established in the 1990s comprising of 12 hectares of land located along the lower reaches of the Ballyleary stream.

The area has a mixture of lake, swamp land, grassland and woodland habitats, used by local schools for educational purposes.

Henderick Verwey Cobh Tidy Towns said “incidents like this are thankfully not very common in the area.”

“There is no excuse for it. There are legitimate means of disposing of your household and electrical waste at low cost.”

“All this person had to do is drive the extra ten minutes to the Rossmore dump where the electrical waste would have been taken free of charge, rather than leave it to someone else to clean up.”

The local authority are currently investigating the finds and are urging the public to report suspicious activity in the area to either Cork County Council’s Environmental Department or the Gardai.